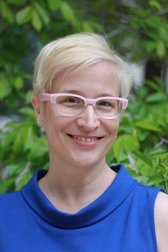 Jessica Winegar is a sociocultural anthropologist who specializes in cultural politics. Her body of work focuses on how people invest particular social arenas—such as art worlds, education, and political protest—with liberating potential, while at the same time re/producing hierarchies of gender, class, race/ethnicity, and generation. She is an anthropologist of the Middle East by training; her research and teaching draw on a range of disciplines and extend to how US institutions deal with the MENA region.

Winegar’s current book project, Counter-Revolutionary Aesthetics: How Egypt’s Uprising Faltered, examines how aesthetic forms, judgments, and practices play a central role in both delegitimizing revolutionary actions and in producing everyday right-wing attachments. It is based on ethnographic research carried out in Egypt before and after the 2011 uprising. This research and writing are supported by Fulbright, the American Council of Learned Societies, the Howard Foundation, and the Institute for Advanced Study in Princeton.

Her first book Creative Reckonings: The Politics of Art and Culture in Contemporary Egypt (Stanford University Press, 2006) examined the intense debates over cultural authenticity and artistic value that accompanied market liberalization in Egypt in the 1990s and early 2000s. It developed the concept of reckoning to analyze how art became a primary site for dealing with the legacies of colonialism, socialism, and modernism in a context of competing state and private market interests in culture. The book was awarded the Albert Hourani Book Award for best book in Middle East Studies and the Arnold Rubin Outstanding Book Award in African studies.

Winegar's second book, co-authored with Lara Deeb, is Anthropology’s Politics: Disciplining the Middle East (Stanford University Press, Fall 2015).  The book uses Middle East anthropology as a lens through which to examine how national and global political-economic forces have enabled and constrained academic work from World War II through the War on Terror.  Based on ethnography and archival research, the book highlights the generational, racialized, and gendered aspects of academic politics as they intersect with the increasing militarization and corporatization of knowledge.

As a Public Voices Fellow of the Op-Ed Project, she published commentary on Muslims in the US, the Middle East uprisings, anthropology, and women in academia in The Hill, TruthOut, Chronicle of Higher Education, Huffington Post, and Scientific American among other publications.

Winegar has received grants and fellowships from the National Endowment for the Humanities, American Council of Learned Societies, Social Science Research Council, Fulbright, the Howard Foundation, the Mellon Foundation, and the Institute for Advanced Study in Princeton.  She has enjoyed postdoctoral fellowships at the University of California at Berkeley, Cornell University, and the School for Advanced Research.

At Northwestern, she is a core member of the Program in Middle East and North African Studies.  This program has an undergraduate major and minor, as well as a Graduate Cluster and Certificate Program.