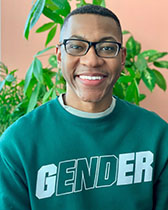 Kenneth Pass is a social scientist from Goldsboro, North Carolina. After completing their Bachelor of Science (’14) in Psychology at Morehouse College and Master of Public Health (’16) at the University of Michigan, Kenneth began pursuing their Ph.D. in Sociology at Northwestern University in 2016. Kenneth has been awarded fellowships from the Ford Foundation, Social Science Research Council, National Institute of Mental Health, and Center for Africana Studies at the University of Pennsylvania. Broadly, their research has covered socially relevant topics, such as health inequalities, Black sexual politics, scientific and technological innovation, and law. Their dissertation tracks scientific and legal changes in the HIV crisis, during and after the Obama Era, to study the “political possibility” of an AIDS-free generation for African Americans. In addition to their research interests, Kenneth has participated in undergraduate and graduate academic mentorship and community-based efforts related to queer and racial justice with keen attention on health and healing.

We are currently remote-only. Please contact us via e-mail or telephone.